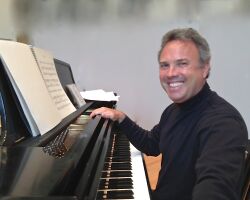 Stephen Shewan (b. 6 August 1962) is an American composer, conductor, pianist and music educator.

Dr. Shewan received a BS in music education from Roberts Wesleyan College, an MM in horn performance from Ithaca College, and a DMA in Music Education/Composition from the Eastman School of Music where his primary teacher was Samuel Adler.

Since 1993, Stephen Shewan has been a music teacher at Williamsville East High School near Buffalo, New York. He taught music at Odessa-Montour High School from 1983-1992. He is also an adjunct professor of music at Roberts Wesleyan College.

Dr. Shewan has composed music for numerous media, including orchestra, string quartet, chamber ensembles, symphonic band, solo voice, choir and piano. His music has been performed by the Rochester Philharmonic Orchestra, the Eastman Wind Ensemble, the US Army Strings, The Master Chorale of Tampa Bay, the Vrije Universiteit Amsterdam Choir, and numerous other choirs, orchestras, bands, chamber ensembles and soloists across the United States, Europe and Australia. Shewan’s music has been broadcast on over 200 radio stations in America on NPR's Performance Today and on Exploring Music with Bill McGlaughlin.

In 2018, Shewan’s The Little Cradle Rocks Tonight was the winning entry in the Welcome Christmas Carol Contest sponsored by Vocal Essence and the American Composer’s Forum.

Shewan is the co-founder of the Williamsville Poetry and Music Celebration, which received the 2011 Award for Excellence and Innovation in the Arts from the College Board. He is a founding member of the New York State School Music Association (NYSSMA) Composition Committee and the Eastern Division Representative to the NAFME Council for Music Education in composition. Shewan is a member of the American Composers Forum and ASCAP. In 2000, he received the Buffalo Philharmonic Orchestra/Erie County Council of Music Coordinators Award for Excellence in Music.