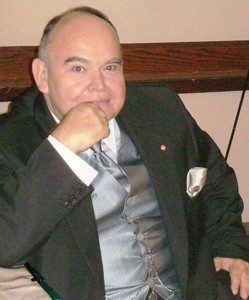 Stephen Kent Goodman (b. 1949) is an American composer and conductor.

After forming his own concert band at age 14, Stephen Kent Goodman made his professional debut at age 16 as “The World’s Youngest Composer/Conductor of Band Music” leading the Guggenheim Memorial Concert's Goldman Band playing his own march The Challenger in New York City’s Central Park.

In the late 1960s while studying on scholarship at the University of Southern California, Goodman kept cutting class to learn automatic musical instrument rebuilding from the professionals. He now owns a player piano and orchestion restoration service in Clovis, California. During the 1970s he composed for Hollywood films, radio, and television, arranged and consulted for recording studios, and helped keep things tapping at the Maple Leaf Club. In 1973 he was elected to the American Society of Composers, Authors, and Publishers (ASCAP) and by 2005 had received his 14th ASCAP Popular Music Composition Award for ragtime.

Creator of Gold Rush Rag and a host of other exhilarating ragtime compositions, Goodman also arranges marches, waltzes, blues, and other types of music for concert bands and mechanical instruments. His works are published and recorded all over the world. He is considered the most published living ragtime composer, having received commissions from the city of Newport, Oregon, the United States Merchant Marine Academy, and a variety of community concert bands nationwide.