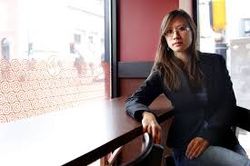 Stephanie Berg (b. 1986, Kansas City, Mo.) is an American composer and clarinetist.

Ms. Berg earned both her bachelor’s and master’s degrees at the University of Missouri (MU), where she studied with Thomas McKenney, Stefan Freund, Paul Garritson, and Edward Dolbashian. She was selected to participate in composition master classes with Armando Bayolo and Andrew List, and has performed in master classes with Jane Carl, Anthony McGill, David Shifrin, and Tina Ward. During her coursework at MU she also served for four years as the graduate assistant for the Creating Original Music Program, where she organized a state-wide composition contest and festival for children of elementary through high school age.

In 2012 she was selected as a resident composer of the Mizzou International Composers Festival, where her piece Ravish and Mayhem was premiered by the internationally acclaimed ensemble Alarm Will Sound. Her music, both for large and small ensembles, has been heard across the region with performances by the Quincy Symphony Orchestra Association, Parkville Symphonic Band, and University Philharmonic of Mizzou. Her chamber work, Of Air Sweet and Water Deep, earned her a spot as one of eight national finalists in the 2011 MTNA competition in composition, and in 2013 she was selected as the winner of the Missouri Composers Orchestra Project. In 2009, she won the prestigious Sinquefield Composition Prize, which resulted in the commissioning of a work for the MU University Philharmonic.

Berg also enjoys a rich performance career, playing clarinet, E-flat clarinet, bass clarinet, and saxophone. For two years she was a member of the Mizzou New Music Ensemble. She has also performed at Sheldon Hall in St. Louis, on the Odyssey Chamber Music Series, and in orchestras, having performed with the Arkansas Symphony Orchestra, the St. Louis Philharmonic, Missouri Symphony, and Philharmonia Columbia.