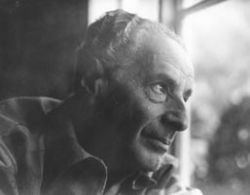 This work bears the designation Opus 39.


The title translates from the German as "Game for Wind Orchestra."

Spiel Op. 39 for Symphonie wind ensemble was composed at the instigation of Paul Hindemith and received its first performance in 1926 directed by Hermann Scherchen at the Donaueschingen Chamber Music Festival. Toch himself wrote an alternative arrangement of the work for the wind section of a symphony orchestra.

Ernst Toch was interested in the artistic potential of the wind ensemble, and jumped at the opportunity given to him by Paul Hindemith to compose such music for the 1926 Donaueschingen festival. Despite the breadth of his compositional output, which included symphonies, concerti, choral works and music for film, the Spiel für Blasorchester, op. 39, is one of only five works for wind completed by Toch.

Spiel is split into three movements, Overture, Idyll and Buffo. The first movement is in a standard A-B-A form in which the A section is marked by mixed meter and bright, articulate melodies, while the B section contrasts with flowing lyricism. The second movement is also in ternary form (A-B-A), and features a prominent oboe solo throughout. The character of the movement is indicative of its name, invoking a peaceful and serene sonic landscape. It is the most romantic of the three movements, harkening back to the musical ideals of the prior musical era, an aesthetic that many other contemporary composers of the time were trying to extinguish.

The last movement is boisterous and playful. Written in sonata form, it carries with it a satirical, almost showman-like quality, somewhat akin to a circus band. The piece is dedicated to Hermann Scherchen, a twentieth-century German conductor and champion of contemporary music.