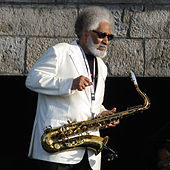 Rollins was born to parents from the United States Virgin Islands. The youngest of three siblings, he grew up in central Harlem and on Sugar Hill, receiving his first alto saxophone at the age of seven or eight. He attended Edward W. Stitt Junior High School and graduated from Benjamin Franklin High School in East Harlem.

Rollins started as a pianist, changed to alto saxophone, and finally switched to tenor in 1946. During his high school years, he played in a band with other future jazz legends Jackie McLean, Kenny Drew, and Art Taylor.

After graduating from high school in 1947, Rollins began performing professionally; he made his first recordings in early 1949 as a sideman with the bebop singer Babs Gonzales (J. J. Johnson was the arranger of the group). Within the next few months, he began to make a name for himself, recording with Johnson and appearing under the leadership of pianist Bud Powell on a seminal "hard bop" session.

In early 1950, Rollins was arrested for armed robbery and spent ten months in Rikers Island jail before being released on parole; in 1952, he was re-arrested for violating the terms of his parole by using heroin.

Between 1951 and 1953, he recorded with Miles Davis, the Modern Jazz Quartet, Charlie Parker, and Thelonious Monk. A breakthrough arrived in 1954 when he recorded his famous compositions Oleo, Airegin, and Doxy with a quintet led by Davis that also featured pianist Horace Silver.

As a saxophonist he had initially been attracted to the jump and R&B sounds of performers like Louis Jordan, but soon became drawn into the mainstream tenor saxophone tradition. The German critic Joachim Berendt described this tradition as sitting between the two poles of the strong sonority of Coleman Hawkins and the light flexible phrasing of Lester Young, which did so much to inspire the fleet improvisation of bebop in the 1950s. Other tenor saxophone influences include Ben Webster and Don Byas. By his mid-teens, Rollins became heavily influenced by alto saxophonist Charlie Parker. During his high school years, he was mentored by the pianist and composer Thelonious Monk, often rehearsing at Monk's apartment.

In a seven-decade career, he has recorded at least sixty albums as leader, and a number of his compositions, including St. Thomas, Oleo, Doxy, Pent-Up House, and Airegin, have become jazz standards. Rollins is widely recognized as one of the most important and influential jazz musicians.