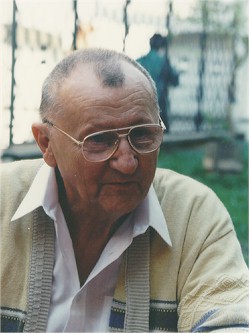 Sonata Concertata , composed in Prague in 1966, and Musica Boema were premiered simultaneously on the same program at the 1978 American Band Masters Convention under the direction of Stanley DeRusha. Sonata concertata is a powerful work where the role of the piano boldly stands and voices its strength in dialogue with the orchestral winds. Contemporary Czech overtones of the 1960s are voice boldly here when and where living in Central Europe (Czechoslovakia) was not the most pleasant experience. Lukas, with his vivid imagination, played it safe. Elements of repression and frustration could have been interpreted by the then political regime as elements of strength, being so mechanical in the sould structure of this amazing composition.

The question is, "Who can now, at the end of the 20th century, understand why this work was created, what was its impetus, what is its statement, and how does it reflect the sound of the composer relative to his environs?"

Getting to know this composer and his sensitivity and management of tension and release reveals a remarkable writing style which causes us to wonder about the turmoil and condition of his heart at the time of the creation of this marvelous composition. Life in Central Europe from the 1950s - 1990s was very restrictive and the only voice that could safely speak was the instrumental musician/composer, for the musicians "words" could not be literally translated. Interpretation was only in the ears, minds and souls of the listeners.

The magnificence of Lukas' talent is not only is his compositional skill, but also in his taste and skill in writing for the various instrumental voices included in his works. The same is true of his choral and string compositions - Lukas has his own harmonic color and uniquely chooses and manges the timbre of the voices, either vocal or instrumental, he engages.

The gift of Lukas is so unassuming. He, like Antonin Dvorak, lives a simple life, yet his profound depth is abundantly full. Perhaps this is why his music is so appealing. It comes from a convincing 'depth center'.