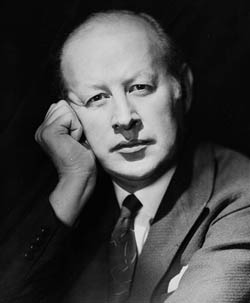 Percy Grainger’s settings of the folk-music of various cultures are widely known to wind band conductors. Although he collected a number of these melodies himself, he was equally willing to turn his attention to a melody collected by someone else. In the case of the present setting, he neither collected the tune nor composed the setting. Sheep Shearing Song was collected in Somerset by the eminent English folk-musicologist Cecil Sharp in 1904 from the singing of William King. Eugene Goossens’ (1893-1962) setting for solo piano of this melody appeared in 1923 as the first of Two Ballades, Op. 38 for solo piano, where it appears under the title Folk Tune. Grainger and Goossens were part of a larger group of musicians who met regularly from about 1906 onwards to privately perform each other’s music and offer encouragement. Goossens also participated in the first all-Grainger concert in May of 1912, playing 2nd violin in the string quartet that performed Molly on the Shore and Mock Morris. In 1923, Goossens accepted George Eastman’s invitation to conduct the newly formed Rochester Philharmonic Orchestra, by which time Grainger was already an American citizen and a fixture on the New York music scene.

In the 1940s, during the years Grainger spent working with the National Music Camp in Interlochen, he increasingly focused his attention to improving the repertory of music for wind band. One of the items that took his fancy was Goossen’s setting of Sheep Shearing Song, which prompted Grainger to set the work for “military band” (the term used by British-trained band composers to indicate a mixed wind band of woodwinds, brass and percussion, as distinguished from the all-brass bands still heard today). Grainger’s scoring was written July 2 to 6, 1942, with parts copied at Interlochen. Upon his return to Springfield, Missouri, in September, he wrote out the conductor’s score. While Goossens’ harmonic treatment of the folk melody is not similar to what Grainger himself might have written, it is not altogether unlike Grainger’s second setting (1920) of Irish Tune from County Derry, distinguished from the earlier settings by featuring “elastic

Very little is known about this short arrangement of the well-known Somerset folk song It’s a Rosebud in June (also known as the Sheep-Shearing Song). It was originally scored for piano by conductor and composer Eugene Goossens, and then re-imagined by Percy Grainger for winds. Grainger’s contributions to the work include many of the compositional techniques he was known for such as interesting harmonies, surprising dissonances, and shifting chromaticism, but they do lead one to wonder: How much of the work is Goossens and how much is Grainger?