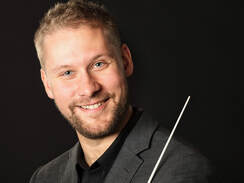 Sauli Saarinen (b. 1988) is a Finnish composer, trumpeter and conductor.

Saarinen has participated in many master classes in Finland and abroad. In 2019, the Finnish Cultural Foundation awarded him a scholarship, which enabled him to travel to St. Petersburg to study Tchaikovsky's music under the guidance of Leonid Korchmar, the long-time conductor of the Mariinsky Theater. That same year, Saarinen was invited to the Dartington Summer Music Festival in the UK to study the music of Mozart, Britten and Stravinsky under the direction of Timothy Redmond and Graeme Jenkins. Together with Jorma Panula, he has studied more traditional repertoire by composers Beethoven, Brahms, Sibelius and Dvořák. In addition to this, he has be selected to master classes with David Zinman, Osmo Vänskä, Hannu Lintu, Johannes Schlaefli, Jukka Iisakkila, Atso Almila, Andrew Parrot, Felix Hauswirth and Nils Schweckendiek.

Sauli has also studied orchestral arrangement and composition at the Sibelius Academy under the guidance of Vladimir Agopov. His debut as a composer happened in 2018, when he participated in an overture composition contest held by the Finnish Defence Forces. His composition Concert Overture for Symphonic Band won the third prize in the finals, which were held at the Finlandia Hall, Helsinki. In 2019, his composition Adagio was performed by the president´s orchestra in a live broadcast at the Presidential Independence Day Reception in Finland. In 2020, Sauli won the first prize with his composition Festival Music in the first Pirkanmaan Pinna composition contest in Finland.

Saarinen is a board member of the Finnish Trumpet Guild and the Finnish Wind Band Association.