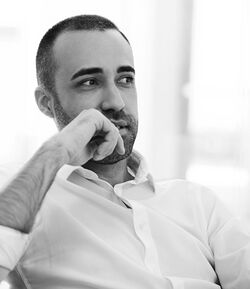 Saül Gómez Soler (b. 1982, Valencia, Spain) is a Spanish composer and conductor.

Gómez has led a number of bands and choirs, and currently [2022] is director of the Unió Musical d’Aielo in Malfrit and the Cercle Musical Primitiva in Albaida. As part of this work he has had the opportunity to direct prestigious soloists such as Vasko Vasilev, Pacho Flores, and Pablo Zinger.

Gómez is frequently employed as an adjudicator. He also teaches orchestra as a member of the Valencia Regional Government teaching corps for music and the scenic arts.

Gómez is a member of the Valencia Academy of Music and the association of composers, COSICOVA. In 2014 he received two nominations for the Hollywood Music in Media Awards.