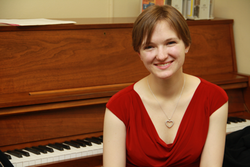 Ms. Palermo hails from a small town called Camden on the rocky coast of Maine. She moved to New Jersey in 2011 to attend Westminster Choir College, where she received a Bachelor of Music degree in music theory and composition. During her time at Westminster, she was a member of the Westminster Symphonic Choir, performing with the Philadelphia Philharmonic, the New Jersey Symphony, and the Vienna Philharmonic. She was also a member of the Westminster Concert Bell Choir for three years, ringing on eight octaves of handbells and seven octaves of handchimes and touring annually around the U.S. Her experiences in the bell choir led her to write for bells Infinity’s Reflection, a piece of music handcrafted for the Westminster Concert Bell Choir’s immense range of instruments and musical ability.

Sarah earned a master's degree in music composition at Michigan State University in 2018, where she was a student of Zhou Tian and Lyn Goeringer. In fall of 2016, she was one of three winners in the MSU College of Music Large Ensemble Competition and was commissioned to write a new piece for the MSU Campus Band, which she titled Renascence, inspired by an Edna St. Vincent Millay poem of the same name.

Sarah’s interest in composition first sparked in middle school, when she began writing pop songs on piano and guitar. At Westminster, she was able to expand her songwriting abilities to compose a full-length pop/rock musical with a friend who wrote the script. Crazy People Like Us is a drama about students at a music conservatory who all struggle to come to terms with their identity. Sarah was awarded a 2017 MSU Excellence in Diversity Award in the Students Making a Difference through Artistic Expressions competition for one of the solos from CPLU, No Way Out.