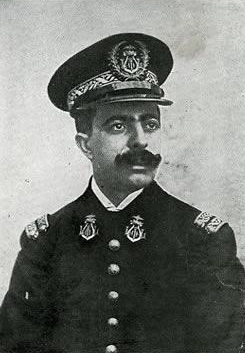 Santiago Lope Gonzalo (23 May 1871, Ezcaray, Spain - 25 September 1906, Burjasot, Spain) was a Spanish conductor and composer of paso dobles. He was born in a small village in the province of Logrono, Spain. His father, a handkerchief weaver, along with his mother, discovered his natural talent for music at a very early age. They engaged Don Angel de Miguel, the plaza organist, to give him instruction on piano and the basics of music.

At the age of six, Santiago joined the village band, playing piccolo, and also learning much about other instruments. One day a military band appeared in the village, and the director took notice of young Santiago. He advised his parents of his great talent and suggested further training. Santiago was sent to Madrid to live with relatives, who enrolled him in the Royal Conservatory of Music. There he studied violin, harmony, and composition.

At age 15, he joined Madrid's famous Apollo Theater orchestra. In a short time, he moved up to principal violinist with the concert orchestra of the Sociedad Artistico Musicale. At 20, he conducted the Romeo Theatre Orchestra, premiering several zarzuelas. Besides being an accomplished violinist, conductor, and composer, he was a recognized authority on instrumentation. Many celebrated composers, among them Frederico Chueca, had Lope orchestrate their works.

Lope went to Valencia in 1902 to direct and conduct at the Ruzofa Theatre. Soon he was busy organizing the now famous Banda Municipale de Valencia, which held its premiere performance on December 8, 1902. The group made excellent progress under Lope's direction until his early death in 1906.

Santiago Lope was known as an excellent arranger and composer. He wrote several zarzuelas while living in Madrid and arranged a number of works for famous Spanish composers, including Federico Chueca, whose march from his zarzuela Cadiz served for a time as the Spanish national anthem. Lope's knowledge of instrumentation was so highly respected that conductors of other bands used his instrumental grouping as a model.