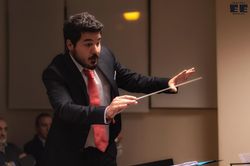 Santi Miguel Alarcón (b. 17 November 1992, Buñol, Spain) is a Spanish composer and conductor.

Miguel began his music studies at the CIM La Harmonónica de Buñol and later at the San Rafael Professional Conservatory of Music with the specialty of Trombone and Piano, obtaining the Extraordinary Prize for Professional Teaching (2010).

In 2011 he won the Audience Award in the composition contest of the Slide Factory in Rotterdam (Holland), and was also a finalist in 2013. He received a commission for the Kerkrade World Music Competition at the 2017 Concert Division, by the CIM La Harmonónica de Buñol with the work Tempus Fugit. In the same year he wrote Sad Clown Symphony as a required piece for the XXXIX Band Contest of the Valencian Community.