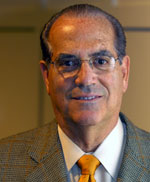 Dr. Feldstein received a Bachelor of Science degree in music education from the State University of New York at Potsdam and Master of Arts and Doctor of Philosophy degrees from Columbia University.

Feldstein performed as a percussionist with jazz groups in many major night clubs and as a studio musician in New York City. He was a professor of music education at the State University of New York at Potsdam for six years. Additionally, he has been a guest conductor throughout the United States and Canada for festivals and has been a clinician and guest speaker at conventions and colleges. In 1968, he became executive vice-president and director of education with the Alfred Publishing Company in Sherman Oaks, California.

As president of his own company, PlayinTime Productions, Inc., Sandy combined a wealth of knowledge and success in both the business and music aspects of music publishing and music education.

Feldstein won several ASCAP awards, was a president of the Percussive Arts Society, was an officer of the Music Industry Council, and was advisor to many music associations. He composed many works for various skill levels. His works for band and method books are in daily use in thousands of schools throughout the United States.