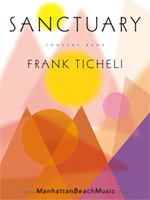 Sanctuary was composed for conductor H. Robert Reynolds as a symbol of our enduring friendship. The work was commissioned in his honor, and received its premiere performance by the band he conducted for 26 years. As a personal tribute to Mr. Reynolds, who was a horn player in his earlier days, I chose the solo horn to be the work's main musical messenger. The opening prologue grows out of a set of pitches that were derived from the letters of his first name (Harrah), an idea I first used fifteen years ago in Postcard (commissioned by Reynolds in memory of his mother.) Vivid college memories of Mr. Reynolds conducting Grainger's Hill Song No. 2 and Colonial Song -- both well known favorites of his -- were also in the back of my mind, as the sounds that I created in some ways echo the lyrical mood of these works.

The word sanctuary conjures a rich array of images. It can imply a place of solitude, comfort, rest, prayer, protection. It can suggest a place that is strong and imposing or one that is very small and private. I believe all of these images are suggested at one point or another in the music. The opening bell sounds suggest peace and joyful reverence. The main horn melody is at once reflective and reassuring. There is also an underlying hint of nostalgia -- a wistfulness, perhaps suggested by the simple three-chord progression which threads the entire work. But there is also an expression of strength and power in the work's dark imposing climax.

After the climax recedes, the main melody disappears for a period of time, replaced by flute and clarinet solo episodes which create repose, space, and distance. But, in the end, the three-chord harmony returns and serves as a doorway for the final appearance of the main horn theme. The work ends with the quiet echo of the opening bells.

Sanctuary was commissioned by the Michigan School Band and Orchestra Association in honor of H. Robert Reynolds. The premiere performance was given by the University of Michigan Symphony Band, Michael Haithcock, conductor, at Hill Auditorium on October 22, 2005.