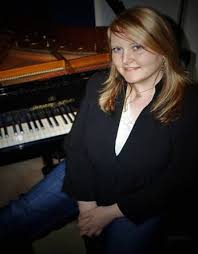 Sally Greenaway (b. 1984) is an Australian composer-pianist.

Greenaway is a graduate from the Royal College of Music, London (2010), where she was the recipient of the Lucy Ann Jones Award and several other scholarships. It was there that she focused on the art of film composition and orchestration, and fell in love with historical instruments, including square pianos, forte pianos and harpsichords. Her jazz piano and jazz arranging/composition skills were first developed at the Jazz Department at the Australian National University School of Music, where she obtained a BMus in 2005.

Greenaway composes and performs in an exceptionally wide range of musical styles - from classical to jazz to film soundtracks. Her works have been performed by the Canberra Symphony Orchestra, Plexus, Trichotomy, the JazzGroove Mothership Orchestra, and, notably, by community and school groups in the Canberra region. She has also had works regularly broadcast on ABC Classic FM including Jazztrack with Mal Stanley.

Greenaway is regularly commissioned to write new music in many different genres by a variety of musicians and organisations. Recent compositions include Worlds Within Worlds written for the Melbourne Symphony Orchestra; Resonance written for the SATB a cappella ensemble the Resonants; and Auróra Musis Amíca, a fanfare for wind orchestra for Canberra Grammar School, commissioned to celebrate the Centenary of Canberra.

Greenaway has won two composition competitions: the Canberra International Music Festival 2009 Young Composer Award, with her a cappella arrangement of Waltzing Matilda for the world-class vocal group Rajaton (Finland); and the Inaugural APRA/JMO National Big Band Composition Competition 2008, with her piece Falling of Seasons, written for the Jazzgroove Mothership Orchestra.

Greenaway has worked with a number of ensembles around Australia as a guest composer and conductor. She is the musical director for ConneXion Big Band and pianist in several other ensembles, including Wicked-Strings! Merlot Ensemble. She also lectures part-time at the Canberra Institute of Technology's Music Industry Centre.