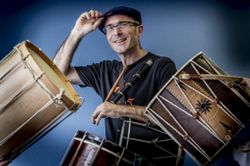 Sabin Bikandi Bilandia is a Basque composer, percussionist and producer.

Bikandi has worked in various groups and organizations since 1980 as a teacher and/or player, including as a teacher of traditional dance at Musikene. He was the editor of Txistulari magazine (1992-1995).

As a composer, he has written and adapted various works of music around the whistle and traditional music. His work covers all types and styles of genres, always in the vicinity of txistu music. (A "txistu" is a three-hole fipple pipe flute important in Basque culture.) He is also a researcher of traditional Basque dance, and a supporter of the Dantzaldi Ibiltaria Project aimed at teaching traditional dance to adults. He is known for Jotamentala (2016), XVIII Premios Max de las artes escénicas (2015) and ¡Atención obras! (2013).

He is currently a drummer for Municipal Band of Txistularis in Bilbao and a founder/member of the group Aikõ.