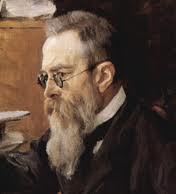 
The work is designated Opus 36. Score cover title is Russian Easter Overture For Symphonic Winds, Op. 36: To the Memory of Mussorgsky and Borodine.

Rimsky-Korsakov composed his Russian Easter Overture, Op. 36, between August 1887 and April 1888, and conducted the premiere in St. Petersburg on December 15, 1888. The work was composed when his powers of form and orchestration were at their height. This mature period produced most of his greatest works, not just this overture but also Scheherazade, Op. 35, and the Capriccio Espagnol, Op. 34. Having taught composition, harmony, and orchestration for some years at the St. Petersburg Conservatory, he achieved in these late works a masterful and uniqueness of form, exquisite melodies, and rich orchestration. In his autobiography, he writes as follows about his overture: “In my overture are combined reminiscences of the ancient prophecy and of the gospel narrative: also a general picture of the Easter service with its pagan merrymaking.”

In this transcription, it is easy to hear his knowledge and his love for wind and percussion instruments. In the transcribing process, one can learn a great deal about how he combined the many colors of the wind instruments and observe how, in this extraordinary work, he used the various colors to portray the somber mystery of Good Friday and the uninhibited rejoicing of Easter Day.

Of the several themes that Rimsky-Korsakov creates in this work, there are two that are exceptional. One opens the Overture and is later repeated by the trombone -- throaty and beseeching, mirroring the priest’s chanting, growing in power throughout the work. A second theme, rhythmic and driving, cleverly introduced by the timpani and spreading contagiously to the other instruments, echoes the Christian ecstasy of the Russian Easter. Woven into these themes are climaxes that only the master Rimsky-Korsakov could create, moments that seem to split the atmosphere apart as they rise to the powerful end.