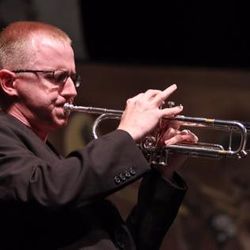 Russell Holland (b. 1980) is an American educator and composer.

Mr. Holland graduated from Tarleton State University in 2004. He served in the U.S. Army Reserve 348th Engineering Detachment Waco TX 1997-2005 as a 21T -- Surveyor and Draftsman E4 Specialist -- and served in Afghanistan 2003.

He has been writing music for band for about twenty-five years, and has been commissioned by several universities, game companies, and short film directors. Military and history are common subjects in his music and also a reason marches are so prevalent in his writing.

Mr. Holland has taught band grades 6 through 12 in Texas on all instruments and directed various bands since 2005. He also has a history of playing jazz in both big bands and small ensembles around the state across different styles and difficulties, with a specialty in jazz improvisation. He was involved in organizing and directing different local jazz ensembles.