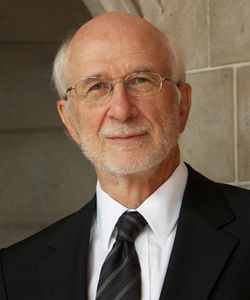 Russell Hartenberger is Professor Emeritus and former Dean of the Faculty of Music, University of Toronto. He has been a member of both the percussion group Nexus and Steve Reich & Musicians since 1971. He began his percussion studies in Oklahoma City with Alan Abel. In 1966 he received his Bachelor of Music degree from Curtis Institute where he studied with Fred D. Hinger. Upon graduation from Curtis, he joined the U.S. Air Force Band and toured throughout the U.S., Europe, and South America as timpanist and xylophone soloist. While in the Air Force Band, Russell received his Master of Music degree from Catholic University where he again studied with Alan Abel. He holds a Ph.D. in World Music from Wesleyan University, specializing in the music of West Africa, North and South India, and Indonesia.

With Steve Reich and Musicians he recorded for ECM, DGG and Nonesuch Records, and performed on the Grammy Award winning recording of Music for 18 Musicians. With the Reich Ensemble, Russell toured throughout the world and performed with the New York Philharmonic, Israel Philharmonic, Cologne Radio Orchestra, London Symphony and Brooklyn Philharmonic.

As a member of Nexus, Russell has performed with leading orchestras in North America, Europe and Asia. Along with members of Nexus, he created the sound track for the Academy Award-winning Full-Length Documentary, The Man Who Skied Down Everest. His awards include the Toronto Arts Award in 1989, Banff Centre for the Arts National Award in 1997, a Juno nomination in 2005, and was inducted into the Percussive Arts Society Hall of Fame in 1999. He was presented with the Leonardo da Vinci World Award of Arts by the World Cultural Council at Leiden University, the Netherlands in November of 2017.

The Nexus CD, Persian Songs, includes his arrangements of music by Moondog and of Persian classical music with Iranian vocalist, Sepideh Raissadat. His composition, The Invisible Proverb is on the Juno-nominated CD, Drumtalker. His other compositions include Telisi Odyssey, Cadence, Raghavan, and Birth of Time.

His article, "Encounters with John Cage," appeared in the Sept. 2012 issue of Percussive Notes and his essay, “Clapping Music: A Performer’s Perspective,” is in The Ashgate Research Companion to Minimalist and Post-minimalist Music (Ashgate 2013). He is editor of The Cambridge Companion to Percussion and author of Performance Practice in the Music of Steve Reich, both published by Cambridge University Press in 2016.