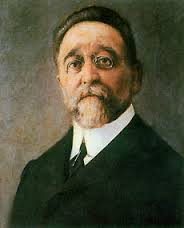 Chapí was born the son of a Valencian barber. He trained in his home town and in Madrid. He wrote a large number of symphonic, band, choral and chamber works, as well as zarzuelas and operas, becoming, alongside Tomás Bretón, a fellow pupil of Emilio Arrieta at the Madrid Conservatory.

He was one of the most popular and important composers of his time. He wrote zarzuelas in all shapes and sizes, including the three-act zarzuela grande and the one-act 'género chico forms. His most celebrated work is La Revoltosa, written in the latter style. Many of the preludes to his zarzuelas (including those to El Tambor de Granaderos and La Patria Chica) have remained staple items in Spanish orchestral concerts.