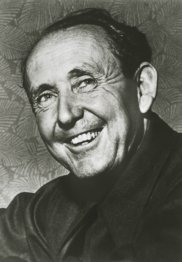 When Harris was young, his family moved to the San Gabriel Valley of California. He played piano and clarinet, and like most young American boys, was interested in baseball and football. While still a young man, he tried farming life and drove a dairy truck.

Harris played clarinet in his school band, and some of his orchestral passages were written to imitate the band style. Though he studied at the University of California, Berkeley, he was still virtually self-taught when he began writing music of his own, but in the early 1920s he had lessons from Arthur Bliss and the senior American composer and researcher of American Indian music, Arthur Farwell. Harris sold his farmland and supported himself as a truck-driver and delivery man for a dairy firm. Gradually he made contacts in the East with other young composers, and partly through Aaron Copland's recommendation he was able to spend 1926-29 in Paris, as one of the many young Americans who received their final musical grooming in the master classes of Nadia Boulanger. Harris had no time for Boulanger's neoclassical, Stravinsky-derived aesthetic, but under her tutelage he began his lifelong study of Renaissance music, and wrote his first significant work: the Concerto for Piano, Clarinet and String Quartet.

Harris formed associations with Howard Hanson at the Eastman School of Music in Rochester and, more importantly, with Serge Koussevitsky at the Boston Symphony Orchestra. These associations secured performance outlets for the large-scale works he was writing. In 1934, a week after its first performance under Koussevitsky, his Symphony ‘1933’ became the first American symphony to be commercially recorded. It was his Symphony No. 3, however, first performed by Koussevitsky in 1939, which proved to be the composer's biggest breakthrough. He also composed several original works for band, most notably Cimarron Overture and the Concerto for Piano and Band.

During the 1930s Harris taught at Mills College, Westminster Choir College (1934–1938) and the Juilliard School of Music. He spent most of the rest of his professional career restlessly moving through teaching posts and residences at American colleges and universities. His final posts were in California, first at UCLA and then at California State University, Los Angeles. Among his pupils were William Schuman, H Owen Reed, John Donald Robb, Robert Turner, Lorne Betts, George Lynn, John Verrall, and Peter Schickele. He received many of America's most prestigious cultural awards, and at the end of his life was proclaimed Honorary Composer Laureate of the State of California.