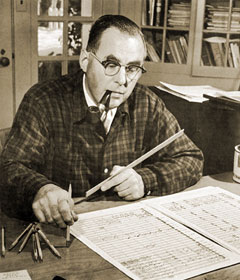 Finney lived for part of his childhood in Valley City, North Dakota, which he commemorated with Skating on the Sheyenne. His post-high school study in music began at the University of Minnesota (with Donald Ferguson) and Carleton College (BA, 1927). He studied with Nadia Boulanger, Edward Burlingame Hill, Alban Berg (from 1931-2) and Roger Sessions (in 1935). Finney taught at the University of Michigan from 1948 to 1973. His students included Leslie Bassett, George Crumb, Roger Reynolds, William Albright, Robert Ashley, Robert Morris] Stephen Chatman, and Robert Cogan.

Ross Finney's compositions include a wide variety of traditional and avant garde styles. Regardless of devices or systems used, he wanted his music to "flow and sing without interruption from beginning to end." His numerous scores (69 in Peters Ed. 1990 Catalogue) include works for orchestra, opera, band, chamber ensembles, keyboard and choral groups. Skating on the Sheyenne and Summer in Valley City are two of his most popular band works. Others include Concerto for Alto Saxophone (1974), Small Town Music, Spaces (band premiere in 1987), and Variations on a Memory (transcribed for 10 players from the 1975 orchestral work). In a June 1993 letter, Finney expressed frustration that Small Town Music was not being performed by more college bands. In his words, "There won't be any more band music from me until what I have written is performed."

He has been described as a towering musical creative force whose music is "imbued with that mysterious quality of emotional intensity that is immediately communicative." Widely admired and respected as a composer, Finney received numerous awards, commissions and honors during his lifetime. Among these are the Pulitzer Prize in 1937; two Guggenheim Fellowships; the Boston Symphony Award in 1956; Brandeis University's Gold medal in 1967; membership in the American Academy and Institute of Arts and Letters; and commissions from Yehudi Menuhin, the Koussevitsky Foundation and the Baltimore Symphony. His orchestral works have been performed by such notable orchestras as the Philadelphia Orchestra, Louisville Orchestra, Minneapolis Orchestra, American Composers Orchestra and the Baltimore Symphony.

Finney's literary works include Making Music; An Introduction to Composition and Thinking About Music: The Collected Writings of Ross Lee Finney.