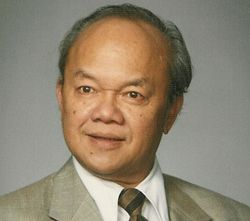 At age 11, Dr. Santos started composing band marches, instrumental and vocal scores and Catholic masses. He was later named a UNESCO scholar and received the Composer of the Year Award. In Manila he was Composer of the Year in 1956 and 1957, and won 12 prizes consecutively in composition contests. Most recently, he received the title of “The Philippine Composer of the Century.” Professor Santos joined the faculty at Wilkes University, Pennsylvania, in 1968, where he performed as a timpanist, pianist, and conductor with several orchestral groups. He has also conducted church choirs in Maryland, New Jersey, and most recently at Lehman, Huntsville and Shavertown United Methodist Churches in Pennsylvania.

He composed the background music for J. Arthur Rank Films at Pinewood Studios in London, England, where he worked with Muir Mathieson and Malcolm Arnold. Among his teachers were Aaron Copland, Irving Fine, Humphrey Searle and conductor Norman Del Mar. Dr. Santos is listed in the New Groves Dictionary of Music and Musicians. A prolific composer, his works include concertos, sonatas, symphonies, symphonic poems, five operas in Philippine dialect, numerous band overtures and more than 200 marches. He wrote 50 masses in Latin and 20 in English and has more than 1,000 musical compositions in the library of the University of the Philippines.

An honored member of the Senior Mozart Club of Wyoming Valley, PA, Mr. Santos privately taught more than 2,000 children since arriving in the Wyoming Valley in 1968. His last musical work, Melinda’s Masquerade, his only ballet, was performed in 1995, after his death in 1994.