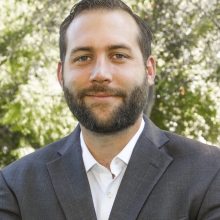 Olin Hannum’s two-movement tone poem of nearly 20 minutes was inspired by a bicycle trip he took with his father across Colorado in 2015.

“During the long days, I would become fixated on melodies that evoked the landscape around us,” Hannum said. “These phrases and motifs floated in and out of grasp and instead of attempting to remember all of them I began the practice of stopping to write them down. These sketches formed the foundation of the piece.”

Even though you should obviously be getting up, your eyes resist opening. The inside of your tent is lit with an indistinct, but permeating glow. You spend a few minutes wrestling with your motivations, faced with two undeniable but conflicting situations: it’s clearly time to reset your consciousness and prepare for the day, but it’s also clearly much nicer in your sleeping bag than out of it. Moving around carefully so as to not come in contact with the frigid parts of the bag, you maneuver your way to the wall. Unzipping the door, your eyes focus past the dew-dripped rainfly and onto the expansive grassy valley that you found the night before. You check your watch and realize it’s already nine thirty. How on earth did you sleep that late? You allow your head to further explore the threshold of your tent and realize that while it’s light outside, the sun isn’t visible in the sky. While it has crossed the Earth’s horizon some hours ago, it remains firmly obscured by the mountains. You’re camped up against the Sawatch range in central Colorado.

As your foggy breath fills the tent, you’d be forgiven for forgetting that it’s the middle of June. Packing up your belongings doesn’t take long; most everything stayed in your bags the night before anyways. Lantern goes back in the bag, water bottles go in their cages, chapstick ... probably better keep that in your pocket. Before exiting the relative comfort of the tent, you check every corner for anything you might have forgotten. The same once-over that you’ve done every day for the last week.

It’ll be another hour before you feel direct sunlight, and another four before you’re hit with the standard early-afternoon thunderstorm. While you’re at eight thousand feet right now, a quick glance at the map indicates that in a few hours, you’ll be down at five. It’s going to be hot as hell down there. Dammit. Still bundled in the only layers you brought, you take mental aim at the next stage of the journey. As you set off for the day, something downstairs is trying to get your attention. Your legs would like to have a word with you. They don’t really feel that it’s fair to go this hard for this many days in a row, and they’d like one off, please.

Setting out, you understand that there won’t be a day off. There are too many sights to see, passes to be climbed, experiences to be had. Another week and you’ll be back home; that’s the correct time for rest. Now is the time for another day of exploring in the American West.

Things are wildly varied and quick-changing in the Rocky Mountains. The air can burn you with frost or burden you with moisture. The culture feels classically western and individualized, but with the unexpected veins of beatnik lifestyle and people with strongly held opinions on the characteristics of coffee. The sky is varied and changes quickly based on time of day, time of year, elevation, and pressure systems. Go up a couple thousand feet and you’re in a completely different climate. If the clouds open up and bellow you with tankers worth of raindrops, just pop under a tree. It’ll be gone in a few minutes.

Cowboys, ski bums, visual artists, and tech giants live next door to each other.

At its heart, Rocky Mountain Sketches is about the tapestry of circumstances that are generated by its namesake range. It is a gathering of the mystery, promise, and resolve of the region. It is a celebration of explorers who traversed the plains only to be confronted by such a mighty obstacle, and then elected to enter. It is a picture of the mountains both as my eyes have captured them, and as they have implanted themselves on my soul.

Dedicated to my parents, Karen and Mark, who have encouraged me to never stop exploring.