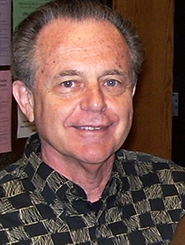 Robert Schietroma (b. 13 September 1943) is an American composer, arranger, educator and percussionist.

Dr. Robert Schietroma is currently a regents professor at the University of North Texas (UNT) after serving as coordinator of percussion from 1977 to 1999. While heading the UNT percussion department, he developed an internationally recognized program offering a myriad of percussion opportunities. The ensemble program was widely recognized for its excellence in all genres including the North Texas Drumline, which won the National Collegiate Marching Percussion Competition twelve times.

In addition to teaching, judging, and consulting, Schietroma maintains an active performance schedule. He has toured with the Warner Bros. production Bugs Bunny on Broadway for the past several years, and performs with the Dallas Opera Orchestra and the Summer Musicals. He has released a DCI Marching Percussion video, several highly regarded CDs with UNT ensembles and authored several instructional textbooks and chamber pieces. As President of drop6 media, Inc., he has published over one hundred ensemble arrangements and compositions.

Schietroma's professional affiliations include the American Society of Composers, Authors and Publishers, American Federation of Musicians, and Percussive Arts Society, which he served as president from 1991 to 1993.