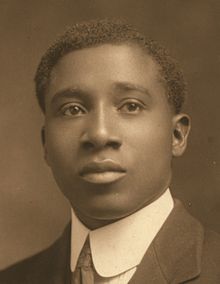 Robert Nathaniel Dett (11 October 1882, Niagara Falls, Ont. – October 2, 1943), often known as R. Nathaniel Dett, was a composer, conductor and pianist in the United States and Canada. During his lifetime he was one of the most successful black composers, known for his use of folk songs and spirituals for choral and piano compositions in the romanticstyle.

Dett was the first African-American to complete a five-year program in music at Oberlin Conservatory. Dett majored in composition and piano and was known for his choral and piano music. Dett also became an important figure because of his efforts in the preservation and promotion of black music.

He was among the first black composers during the early years of the American Society of Composers, Authors and Publishers. His works often appeared among the programs of Will Marion Cook's New York Syncopated Orchestra. Dett himself performed at Carnegie Hall and at the Boston Symphony Hall as a pianist and choir director.