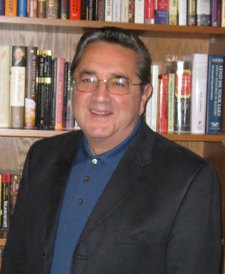 Robert J. Garofalo (b. 25 January 1939, Scranton, Penn.) is an American educator and composer.

Dr. Garofalo holds a B.S. from Mansfield University, and M.M. and Ph.D. from The Catholic University of America.

Garofalo professor of music emeritus and director of graduate programs in instrumental conducting at the Benjamin T, Rome School of Music of The Catholic University of America in Washington, D.C. During his tenure at CUA, Dr. Garofalo’s performing ensembles -- the Wind Symphony, Heritage Americana, and Chamber Winds --have performed to critical acclaim at conferences of the Music Educators national Conference, the College Band Directors National Association, and the American Bandmasters Association.

After receiving his bachelor’s degree, Garofalo was a trombonist with the U.S. Air Force Band and toured widely with their jazz ensemble, the Airmen of Note.  He began his teaching career as instructor of music at Keene State College.  He also spent eight years teaching music (mostly instrumental) at the elementary and secondary school levels. Garofalo joined the music faculty of the Catholic University of America in Washington in 1967.

From 1989 to 1993, Garofalo was music director of Eternal Winds of Washington, a versatile professional ensemble that performed music from the Renaissance to the 20th century. From 1978 to 1988 he was conductor of Heritage Americana, a recreated Civil War-era brass band that performed on period instruments. Heritage Americana is featured in the video series The History of Bands in America and is heard on the sound track of Ken Burns’ TV documentary The Civil War. Heritage Americana’s recordings of Civil War brass band music are considered to be among the most authentic of their genre.

Garofalo is author of thirteen books, including Guides to Band Masterworks and Guide to Score Study (co-authored with Frank Battisti), and numerous journal articles and music publications covering a wide range of topics. His articles, both scholarly and practical, have appeared in national and international music journals and dictionaries. Garofalo is past president of the Eastern Division of the College band Directors National Association and a member of MENC, NCBA, and WASBE - the World Association of Symphonic Bands and Ensembles.

Garofalo maintains a busy schedule as a guest conductor, clinician, lecturer, and adjudicator throughout the United States, Canada and abroad.