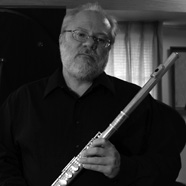 Robert Fruehwald (b. 1957) is an American flautist, composer and educator.

Dr. Fruehwald grew up in Louisville, Kentucky, where he played flute in the Louisville Youth Orchestra. He attended the University of Louisville, where he received a BM degree in composition (with honors). While in Louisville, he studied composition with Nelson Keyes, Claude Baker and Dan Welcher, and flute with Francis Fuge. He earned his master of fine arts degree at the California Institute of the Arts, studying with Mel Powell, Morton Subotnick and Leonard Rosenman.

He returned to the Midwest to work on a Ph.D. at Washington University in St. Louis. There, he studied under Robert Wykes and finished his doctorate degree in 1985. Before accepting a teaching position in the late 1980s, Dr. Fruehwald developed a series of computer programs to print musical examples for scholarly journals and books. In 1989, he took a teaching position at Southeast Missouri State University.

Dr. Fruehwald has taught numerous subjects at Southeast including applied composition, music theory, applied flute, electronic-computer music and the history of modernism. He served as chair of the Department of Music from 1995-2000.

In 1997, Dr. Fruehwald was named "Composer of the Year" by the Missouri Music Teachers Association and he received the College of Liberal Arts Award for Creative Activity in 1994.