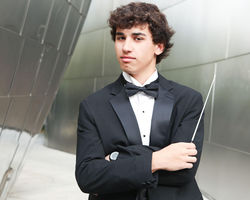 In 2015, Robby was selected as one of four Fellows for the Nancy and Barry Sanders Los Angeles Philharmonic Composer Fellowship Program. Under this program, Robby received composition instruction from composers Andrew Norman and Sarah Gibson of the University of Southern California, and has written a number of pieces performed by the LA Philharmonic, the American Youth Symphony, Kaleidoscope, the Los Angeles Percussion Quartet, the Calder String Quartet, the International Contemporary Ensemble (ICE), and members of the Los Angeles Master Chorale. Robby has also privately studied composition with composers Derrick Spiva and Ian Krouse.

In May 2017, Robby’s commission by the National Children’s Chorus, titled Cry for Love, had its world premiere at Carnegie Hall, and West Coast premiere at Royce Hall.

Robby has written and is writing an ever-growing library of band compositions. Commissioned by the Cal State Northridge Wind Ensemble, A Storm’s Passing, made its concert debut in November 2016, and in May 2018, Syzygy was premiered by the Hart High School Wind Ensemble.

Robby is also interested in scoring music for films and video games, and is a three-time finalist in the Marvin Hamlisch International Film Scoring Competition Youth Category.

Robby is currently a music composition and a percussion performance major at the University of California, Los Angeles (UCLA).