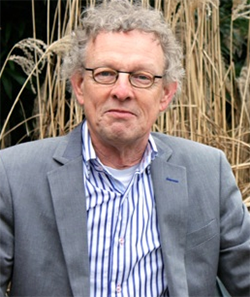 Rob Goorhuis (b. 25 March 1948, Amsterdam, the Netherlands) is a Dutch composer, organist and conductor.

At the age of 13-14, he began his first music study with the organist Bernard Bartelink, with whom he first studied piano, and later, organ. After leaving middle school, he attended the Institute for Church Music Studies in Utrecht, specializing in organ and choral conducting. He also develop an interest in conducting and composition. He studied piano with Thom Bollen and Rinus Groot, organ with Bernard Bartelink and Maurice Pirenne, choral conducting with Hans Ponten, music theory with Anne Mulder, and orchestral conducting with Paul Hupperts and Frits Knol.

In 1977, Goorhuis received a commission from the Ministry of CRM to write a piece for fanfare band. The result was Concertino for Fanfare, which gained him the attention of the band world. He then began to receive more commissions to compose for wind and fanfare band.

Goorhuis was active with a number of choruses and orchestras, with which he performed concerts on radio and television. He also directed the Utrecht Accompaniment Orchestra for one year.

His first works were quite difficult to perform, but as he matured, he began to write pieces for music societies in the lower degrees of difficulty.

He became director of the choir at the Barbara Church in Bunnik in 1970, and was named director of the orchestra at the Bilse Music School in 1985. He also worked with youth in conducting courses for the Foundation for the Co-operation of Netherlands Choral Organizations.

Goorhuis is active as an adjudicator at wind band and solo competitions, and served in that capacity at the World Music Competition in Kerkrade, the Netherlands Brass Band Championship in Zutphen, the Swiss Open Contest, and the World Band Festival in Lucern.

In 2000, he wrote the compulsory test piece for the World Music Competition in Kerkrade for the 1st World Championship for Brass Bands. One year later, he wrote A Tribute to Henk Badings, a post-humus musical tribute to that great leader of wind music in the Netherlands.