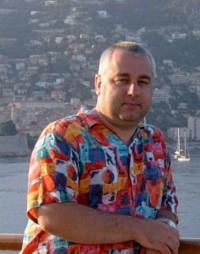 Richard Phillips (b. c. 1963, England) is a British pianist, composer and arranger.

Richard Phillips grew up very much grounded in the Salvation Army. He recounted:

I joined the young people's band and junior choir and becoming a fully fledged Salvationist was a natural progression. I was enrolled as a soldier of The Salvation Army when I was 15 at the Chatham Corps in Kent. My first recollection of music making was when my father brought home a spare cornet from Chatham Salvation Army when I was four. We also had a piano at home and I used to play some one fingered tunes that my parents, both being musicians themselves, taught me.

Richard is the conductor of The Salvation Army band at Kettering Corps who play regularly every Sunday. He is also one of three pianists who regularly play the piano at the Corps' Sunday worship.

Living in Corby, Northants, for many years Richard was an employee of the Salvation Army during which time he traveled and performed in numerous countries throughout the world. He is currently teaching music at a large independent comprehensive school, the Thomas Deacon Academy in Peterborough.