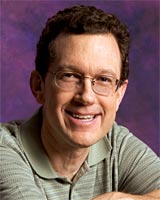 Mr. Meyer graduated from California State University at Los Angeles in 1980 with a Bachelor of Music Education degree. He has been involved in music education for more than 22 years. He first taught instrumental music in the Pasadena (California) school system for 12 years. He recently completed his 16th year as conductor of the Pasadena Youth Symphony Orchestra. Currently, Meyer directs the orchestras at Oak Avenue Intermediate School in Tempe City, California, and is in charge of the city’s elementary string program. Meyer has been a guest conductor, clinician, and adjudicator throughout California, and has been on the staff of Bellis Music Camp for 21 years.

Meyer is nationally recognized for his compositions and arrangements for young orchestras and bands. His composition Celebration! was awarded first prize in the 1989 National School Orchestra Association composition contest, and his work, Millennium won their 1998 prize. His Geometric Dances was awarded first prize in the Texas Orchestra Directors Association composition contest. In addition, Meyer is co-author with Andrew Dabczynski and Bob Phillips of String Explorer, a beginning string method.

In 1994, Meyer was named Outstanding Music Educator by the Pasadena Area Youth Music Council, and in 1996, he received the Pasadena Arts Council Gold Crown Award for performing arts.