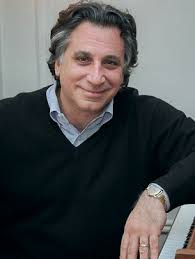 Richard Danielpour (b. 28 January 1956, New York) is an American composer.

Danielpour was born of Persian/Jewish descent. He studied at Oberlin College and the New England Conservatory of Music, and later at the Juilliard School of Music, where he received a DMA in composition in 1986. His primary composition professors at Juilliard were Vincent Persichetti and Peter Mennin. Danielpour currently teaches at the Manhattan School of Music (since 1993) and the Curtis Institute of Music (since 1997).

Dr. Danielpour has become one of the most sought-after composers of his generation – a composer whose distinctive American voice is part of a rich neo-Romantic heritage with influences from pivotal composers like Britten, Copland, Bernstein, and Barber. His works are "solidly rooted in the soil of tradition, yet [sing] with an optimistic voice for today... [they] speak to the heart as well as the mind."

Danielpour has commented that "music [must] have an immediate visceral impact and elicit a visceral response." This visceral element can indeed be heard throughout Danielpour's œvre: expansive, sweeping, romantic gestures; energetic rhythmic accentuations; contrasting stylistic characters; arresting, introspective, melodic beauty; rich, enticing orchestrations; and brilliantly juxtaposed, yet cohesive harmonic angles. His impact on the contemporary music scene stands firm, with an illustrious array of international champions and a reputation as a devoted mentor and educator.

Among Danielpour's awards are a Guggenheim Foundation Fellowship, the Charles Ives Fellowship and a Lifetime Achievement Award – both from the American Academy of Arts and Letters, five Macdowell Colony Fellowships, a Jerome Foundation Award, and a Rockefellar Foundation Grant.

As an educator, Danielpour serves on the faculties of both the Curtis Institute of Music and the Manhattan School of Music, while also participating in master classes and residencies around the country.