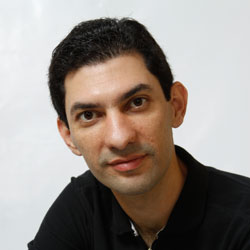 Mr. Goulart holds a Bachelor of Music degree in saxophone from UFMG under the tutorship of Professor Dilson Florêncio.

He is the main composer and arranger of Monte Pascoal, which resulted in an album of his own music and versions of well-known popular songs.

His compositions and arrangements cover different levels and formations, including music for saxophone, symphonic orchestra, symphonic band, choir, big band, etc. In 2017, he received an honorable mention in the 2º Iberoamerican Composition Competition for Children and Youth Orchestra Ibermúsicas program. Also in 2017, his composition Impressões Francesas, composed during a period of an artist residency in France, was among the finalist works of the Tinta Fresca Festival of the Minas Gerais Philharmonic Orchestra. His work Suite do Vale was also among the finalists of the International Composition Competition of WASBE in Utrecht (Holland). Goulart's works have been presented in several countries, including Brazil, Spain, U.S., Chile, Poland and Mexico. Among the awards are the first place in the National Composition Contest for Symphonic Band (2014) and first place in the Arrangements Competition for Wind Bands (2009).

He was the founder of the wind orchestra in the Fundação de Educação Artística, where he worked as a coordinator for the group and other related projects, like the composition contests for wind orchestra. In 2015 he headed the Project Pró-banda in the city of Florestal (MG) promoting workshops to improve band musicians' skills and also being responsible for commissions of repertoire and didactic material for teaching them. Renato also works as instructor on festivals and workshops dedicated to saxophone, orchestration and arrangement.