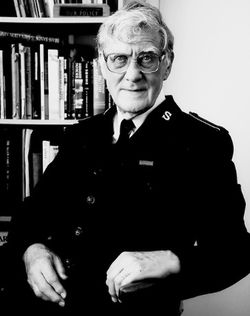 The majority of his working life was spent as staff member of the Salvation Army Music Editorial Department, London, as an editor and was editor in chief of that department from 1967 to 1980.

Ray Steadman-Allen was editor of The Musician from 1983 to 1985, general editor of The Salvation Army Tune Book 1986, and was the author of Colour and Texture in the Brass Band. He traveled extensively throughout Europe, Australia, Scandinavia and U.S., lecturing, conducting and teaching. He was vice chairman of the Association of Brass Band Conductors and President of the National College of Music.

After retiring he devoted a considerable amount of time to composition and arranging. He was chosen to transcribe A Downland Suite and Comedy Overture by John Ireland from brass band to concert band. In addition, he was commissioned to write the test piece for the National Brass Band Championships Finals at the Royal Albert Hall, and the result, Seascapes was used and widely appreciated in 1988.