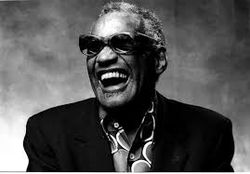 His family moved to Greenville, Florida, when he was an infant. When he was five years old, he began to lose his sight, and by the time he was seven years old, he was blind. He then became a charity student at the state-supported school for the deaf and blind in St. Augustine, Florida. There he learned to read, write, and arrange music in Braille, score for big bands, and play trumpet, piano, organ, sax, and clarinet. His mother died when he was 15, and he then left school to tour the South with a number of dance bands that played in black dance halls.

In 1947, Charles moved to Tampa, Florida, where he had two jobs: one as a pianist for Charlie Brantley's Honeydippers, a seven-piece band; and another as a member of a white country band called The Florida Playboys. This is where he began his habit of always wearing sunglasses, made by designer Billy Stickles. Ray Charles Robinson dropped his last name to avoid confusion with the boxer Sugar Ray Robinson, and in his early career modelled himself on Nat "King" Cole. His first four recordings — Wondering and Wondering, Walking and Talking, Why Did You Go? and I Found My Baby There -- were made in Tampa.

Charles had always played piano for other people, but he was keen to have his own band, and so followed his friend Gossie McKee to Seattle, Washington, in March 1948, knowing that the biggest radio hits came from northern cities. Here he met and befriended a 15-year-old Quincy Jones.

He started playing the 1 a.m.-5 a.m. shift at the Rocking Chair with his band McSon Trio, which featured McKee on guitar and Milton Garrett on bass. In April 1949, Charles and his band recorded Confession Blues, which became his first national hit, soaring to the second spot on the Billboard R&B chart. While still working at the Rocking Chair, he also arranged songs for other artists, including Cole Porter's Ghost of a Chance and Dizzy Gillespie's Emanon. After the success of his first two singles, Charles moved to Los Angeles in 1950, and spent the next few years touring with blues artist Lowell Fulson as his musical director.

Charles reached the pinnacle of his success at Atlantic with the release of What'd I Say, a complex song that combined gospel, jazz, blues and Latin music, which Charles would later claim he had composed spontaneously as he was performing in clubs and dances with his small band. Despite some radio stations banning the song because of its sexually suggestive lyrics, the song became Charles's first ever crossover top ten pop record.

He pioneered the genre of soul music during the 1950s by combining rhythm and blues, gospel, and blues styles into the music he recorded for Atlantic Records. He also contributed to the racial integration of country and pop music during the 1960s with his crossover success on ABC Records, most notably with his two Modern Sounds albums. While he was with ABC, Charles became one of the first African-American musicians to be granted artistic control by a mainstream record company.

Throughout his legendary career, Charles won 12 competitive Grammys, earned three Emmy nominations, scored the Kennedy Center Honors, the Grammy Lifetime Achievement Award, the National Medal of Arts, and was inducted into the Rock, Jazz, and Rhythm and Blues halls of fame.