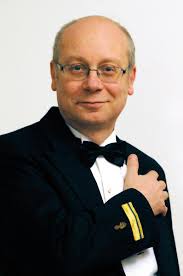 Mr. Ampuja studied French horn playing, music theory and conducting at the Sibelius Academy from 1980 to 1988. In 1993, he studied in England at the Royal Marines military music school.

Mr. Ampuja led the Guard bands from 1988 to 2006 and then moved to the Armour Band in Hämeenlinna. From 2009 to 2012, he served as the Guards Band Manager and was then retired. He has been responsible for a number of major events such as music or directing the Gulf of World Cup 2001, Linnanmäki 50th anniversary, Danny's 60-year anniversary concert, as well as Sibelius Singing Competition.

He composes in different styles, serious as entertainment for concerts, advertisements to and TV entertainment programs. In 1992, he composed the music for the Pope's visit. He is a prolific arranger.

Mr. Ampuja has worked as a clinician at home and abroad, music camps and such. He has been the Finnish Wind Band Association and chairman of the Sibelius. In recent years he has developed a strong young amateur music catalog. He is the founder and editor-in-chief of Wind News magazine and is the author of two textbooks on music.