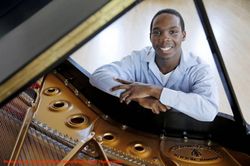 Quinn Mason (b. 1996, Shreveport, La.) is an American composer and conductor.

His orchestral music has received numerous performances in the United States by the Dallas Symphony Orchestra, San Francisco Symphony, Utah Symphony Orchestra, and many others. His work has been played in Europe by the Orchestra Sinfonica Nazionale della RAI.

Mason has received awards from the American Composers Forum, Voices of Change, Texas A&M University, the Dallas Foundation, the Philadelphia Youth Orchestra, ASCAP, the Heartland Symphony Orchestra, Arizona State University Symphony Orchestra and was also named as a finalist for 2020’s Texan of the Year. He is also a conductor, having studied with Marin Alsop, James Ross, Miguel Harth-Bedoya and Will White, and has guest conducted Orchestra Seattle and the MusicaNova Orchestra.