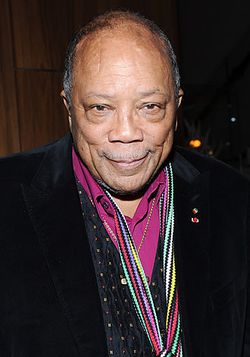 In 1943 Jones and his family moved to Bremerton, Washington, where his father got a wartime job at the Puget Sound Naval Shipyard. After the war, the family moved to Seattle, where Jones attended Garfield High School. In high school, he developed his skills as a trumpeter and arranger. Jones and Charles Taylor began playing music together, and at the age of 14 they played with a National Reserve band. Jones has said he got much more experience with music growing up in a smaller city because he otherwise would have faced too much competition.

At age 14, Jones introduced himself to 16-year-old Ray Charles after watching him play at the Black Elks Club. Jones cites Charles as an early inspiration for his own music career, noting that Charles overcame a disability (blindness) to achieve his musical goals. In 1951, Jones earned a scholarship to Seattle University. After one semester, Jones transferred to what is now the Berklee College of Music in Boston on another scholarship. While studying at Berklee, he played at Izzy Ort's Bar & Grille with Bunny Campbell and Preston Sandiford, whom he cited as important musical influences. He left his studies after receiving an offer to tour as a trumpeter, arranger, and pianist with the bandleader Lionel Hampton and embarked on his professional career.

Jones was the producer, with Michael Jackson, of several of Jackson's albums. In 2013, Jones was inducted into the Rock & Roll Hall of Fame as the winner, alongside Lou Adler, of the Ahmet Ertegun Award. He was named one of the most influential jazz musicians of the 20th century by Time magazine.

Jones' career spans over 60 years in the entertainment industry with a record 80 Grammy Award nominations, 28 Grammys, and a Grammy Legend Award in 1992.