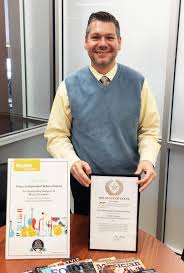 Preston Hazzard (b. Euless, Tx.) is an American composer and educator.

Mr. Hazzard grew up under the tutelage of Tom Neugent at Trinity High School. Mr. Hazzard is a graduate of Howard Payne University in Brownwood, Texas, While in college, Mr. Hazzard studied conducting with Robert Tucker. He served as the college drum major for two years where he did music arrangements and show design for the band. He also served as the president of the Kappa Kappa Psi and MENC chapters. Mr. Hazzard is currently completing his graduate degree in wind conducting at the University of North Texas with Dennis Fisher and Eugene Migliaro Corpron.

Mr. Hazzard currently serves as the director of bands at Frisco High School. Prior to his appointment at Frisco High School he served as the director of bands and fine arts department chair at Denton High School. During his tenure at Denton High School, Mr. Hazzard has also served as the Texas Music Educators Association Region 24 Band Division Chair. In addition, he is an annual clinician at the Bands of America Summer Symposium’s leadership training week in Bloomington, Illinois. He is an active leadership and team-building consultant throughout the year. Mr. Hazzard spent 10 years heading up the drum major, marching, and leadership tracks at the Howard Payne University Leadership Camp.

Prior to his appointment at Denton High School, Mr. Hazzard worked as the assistant director at Marcus High School in Flower Mound. He was directly responsible for working with the symphonic, concert and varsity bands. In addition, he created and directed the jazz ensemble, flute choir, and trumpet choir. Mr. Hazzard's bands have participated in many festival events throughout the country some of which include Crested Butte, Disney World, and Bands of America.

Mr. Hazzard's teaching experience prior to his appointment at Marcus High School was at Hedrick Middle School also of the Lewisville Independent School District. Mr. Hazzard directed the symphonic band and jazz ensemble. Throughout his career, Mr. Hazzard's bands have earned consistent Sweepstakes titles at the UIL Concert and Sight Reading Contest. In 2003, the Denton High School Wind Ensemble was selected to perform in Indianapolis, Indiana at the Bands of America National Concert Band Festival. In 2005, the Wind Ensemble was also selected as a state finalist in the Texas Music Educators Association State Honor Band competition.

Mr. Hazzard is an active clinician and adjudicator throughout Texas. In addition, he is a composer and arranger. Performances of his marching band arrangements are performed by some of the top bands throughout the state of Texas. His professional affiliations include the Texas Music Educators Association, Texas Bandmasters Association, and the International Trumpet Guild.