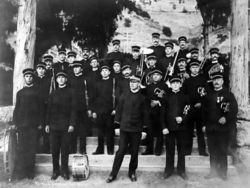 There has been little written about the composer of Porter’s Catalina Band, W. Dwight McCaughey. His most popular work is credited as Alda Overture. It is believed that he resided in several California towns.

“Porter’s” presents many challenges in performance. Euphonium countermelodies and several variations in dynamics characterize the first and second strains. The flutes and clarinets have a great chance to display technique in the trio. The overall length of the march also creates hazards from an endurance standpoint. This march has proved most successful for many bands in both marching and concert settings.

There existed a Porter's Catalina Band in the early years of the 20th century. To induce tourists to visit Catalina on their steamboats, the Banning brothers (owners of Catalina from 1891 to 1919) would offer “Free Camp Grounds, with Water” as well as showcase the performance of Porter’s Catalina Island Band at the Avalon Bowl. Charles W. Porter was the manager, who often read a poem or told a joke during summer concert nights (don't know that he was actually part of the band). The band's conductor for many years was George Mulford.