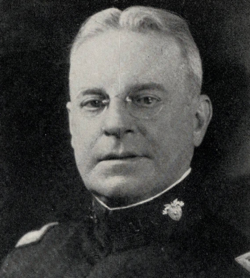 Egner learned to play the violin at the age of six and later took up the cello. He led his own orchestra in Atlantic City, New Jersey, in 1886, and from 1888-1898 he played cello with Theodore Thomas’ orchestra, the New York Philharmonic, and the Metropolitan Opera Orchestra.

In 1898, he became director of the 7th U.S. Infantry Band in the Philippine Islands and returned to New York in 1891 to lead bands and teach music. In 1909, he became a teacher of music at the U.S. Military Academy at West Point, a position he held until 1917, when he was made director of the band. When he assumed this position, he was commissioned as a first lieutenant. He retired from this position in 1934. Egner is best remembered as the composer of On, Brave Old Army Team, and The Official West Point March. The total number of his original compositions is said to be over 200.