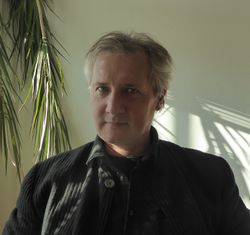 Peter Machajdík (b. 1 June 1961, Bratislava, Slovakia) is a Slovak composer, and sound and visual artist.

In the 1990s, Machajdík took part in seminars with Vinko Globokar, Karlheinz Stockhausen, Clarence Barlow, Konrad Boehmer, and others. In 1992, he was the guest of the DAAD Artists-in-Berlin Program.

Machajdik has composed music in nearly all genres, including orchestra, band, chorus, chamber music, works for solo instrument, works for piano and organ, as well as liturgical works and hymns. Moreover, he has created a number of graphic notations, including the Dialogue with... series which is based on letters received from composer colleagues with additional visual elements added. While in this series the written content of the letters may appear as audible text, other graphic notations are purely visual (like Wold). Others again contain notation or text describing elements to be performed (like Donauklang).

Peter Machajdík's music often asks questions about the society in which we live. It calls for humanity and responsibility that human beings should have to each other and to the world. Machajdík's works, often considered as the counterpoint to the violence, intolerance, racism and greed of our age, are marked by a keen sensitivity to instrumental colour and texture.

Film credits include Machajdik's scores for 4 Schüler gegen Stalin (2005), Wild Slovakia (2015) and Miloš and the Lynxes (2010). Machajdik has worked with choreographers and dancers such as Dorothea Rust, Studio tanca, Petra Fornayova, Tina Mantel, Lucia Kašiarová, and others.

Mr. Machajdík has served as visiting professor at the Faculty of Arts in Košice. He currently [2021] lives in Berlin, Germany.