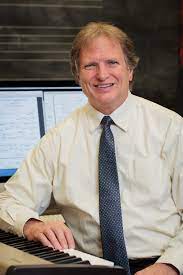 Peter Fischer (b. 1956) is an American composer and educator.

Dr. Fischer studied composition with Dinos Constantinides, Peter Hesterman, Mark Lee, Paul Haydn, and Jan Bach. He studied electronic and computer music with Stephen David Beck. He studied piano with Cynthia Geyer, Mark Lee, and George Sanders. He completed a DMA in music composition at Louisiana State University and holds degrees in music and English literature from Illinois Benedictine College, and a master's degree in music composition from Eastern Illinois University. Dr. Fischer is [2022] an associate professor of music at Texas Tech University where he teaches composition and theory.

His works have been performed nationally and internationally. Recent music includes The Universe Cantos (2021), a suite of five movements for large orchestra, his three-movement Piano Concerto (2019), Primordial (2018) for large orchestra, a Violin Concerto, and the Piano Quartet, commissioned and premiered in 2016. Dr. Fischer has a rich library of choral works as well, which have been performed at the ACDA Regional Convention in Salt Lake City, and the National SCI Convention in Columbia, South Carolina.

Prestigious international conferences invited commissioned works for premieres at the Saxophone Congress in Slovakia (Cobalt Blue for alto saxophone and piano), the Viola Congress in Iceland (Reykjavík Quintet for solo viola and string quartet), and the ClarinetFest in Kansas City (Sonata for Clarinet and Piano). He was named the grand prize winner of the 2008 International Society of Bassists competition for his Sonata for Contrabass and Piano, premiered at their International Convention at Penn State University.