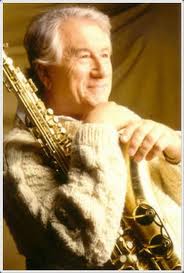 The Spanish composer Pedro Iturralde (b. 1929) has to be considered both as pioneer and nestor [sic] of Spanish jazz music. Pequeña Czarda (Little Dance) is a virtuoso little solo piece for saxophone and piano in classic style. Roger Niese did make a transcription for alto saxophone and symphonic band.

Pequeña Czarda (Little Dance) was composed by Pedro Iturralde (1929-) when he was 20 years old. The present version was orchestrated by his brother Javier and has been arranged for symphonic band by Roger Niese. Iturralde is a Spanish saxophonist, saxophone teacher and composer, and a pioneer of Spanish jazz music.

The ”czarda” is a popular Hungarian dance in binary form, often characterized by a variation in tempo -- it starts out slowly (lassü) and ends in a very fast tempo (friss, literally ”fresh”). It is danced by a male and female, with the female wearing a traditional wide skirt which takes on a distinctive shape as it twirls. One notable example of a czarda can be found in Strauss’s Die Fledermaus, sung by Rosalinde. Roger Niese’s arrangement of Iturralde’s Pequeña Czarda (little dance) is a virtuoso solo piece for alto saxophone and band.