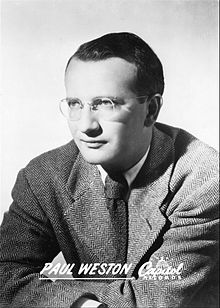 Born Paul Wetstein, Weston had a keen interest in music from an early age and learned to play the piano. He was educated at Springfield High School, before attending Dartmouth College and Columbia University. At Dartmouth he formed his own band, as well as touring with the college band. He later joined Columbia's dance band, The Blue Lions, but was temporarily left unable to perform following a rail accident, and did some arrangement work while he recovered. Weston sold his first musical arrangements to Joe Haymes in 1934. After Haymes requested more material, Weston's music was heard by Rudy Vallee, who offered him work on his radio show. Weston also met Tommy Dorsey through Haymes, and in 1936 became a member of Dorsey's orchestra. Weston persuaded Dorsey to hire The Pied Pipers after hearing them in 1938, and the group toured with the bandleader.

After leaving Dorsey in 1940, Weston worked with Dinah Shore, and moved to Hollywood after being offered work in films. In California he met Johnny Mercer, who invited him to write for his new label, Capitol Records. Weston became Music Director at Capitol, where he worked with Jo Stafford, and developed the Mood Music genre. Stafford moved with him to Columbia Records in 1950, and the couple were married in 1952. Weston worked extensively in television from the 1950s to the 1970s. Weston pioneered mood music and becoming known as "the Father of Mood Music". His compositions include popular music songs such as I Should Care, Day by Day and Shrimp Boats. He also wrote classical pieces, including Crescent City Suite and religious music, authoring several hymns and masses.

Weston is a founding member of the National Academy of Arts and Sciences, and responsible for the launch of the Grammy Awards, which were first presented in 1959. Weston was honored with a Trustee Award Grammy in 1971, and spent three years as Musical Director of Disney on Parade.