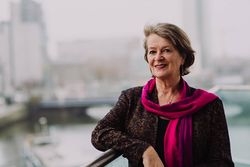 Pádraigín was born in an Irish-speaking household to Pádraig Ó hUallacháín and Eithne Devlin from Cullyhanna, Co.Armagh. Her father, a teacher, writer and song collector, collected older songs from the Oriel area and in Rannafast, and encouraged Pádraigín and her siblings to sing.

Pádraigín attended school at St Louis, County Monaghan, before beginning a degree course at the University of Ulster.

In August 1976, Pádraigín became a television newsreader at RTÉ, Ireland's national broadcaster. She also researched and presented numerous radio programmes in English and in Irish for RTÉ Radio. Pádraigín left RTÉ in 1980 to become a school teacher in Athlone, County Westmeath.

In 1994, Pádraigín recorded her first full-length album with Garry Ó Briain. A Stór is a Stóirín featured 36 songs for all ages, with an emphasis on songs suitable for primary school children. Several other albums have followed.

Pádraigín is the author of A Hidden Ulster – people, songs and traditions of Oriel (Four Courts Press, 2003), and the author/editor of Oriel Arts Project, launched in 2017.