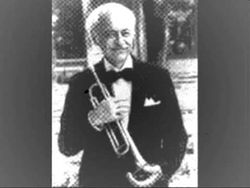 For much of his early career, after studying trumpet and composition in the Leipzig Conservatory of Music until graduating in 1888, it is unknown what Böhme's musical activities were, though it is probable he concertized, playing in smaller orchestras around Germany.

From 1894 to1896 he played in the Budapest Opera Orchestra and then moved to St. Petersburg, Russia, in 1897. Böhme played cornet for 24 years in the Mariinsky Theatre, turned to teaching at a music school on Vasilievsky Island in St. Petersburg for nine further years, from 1921-1930, and then returned to opera with the Leningrad Drama Theatre until 1934.

In 1934, however, the Great Terror began under Joseph Stalin, and in 1936 a committee was established to oversee the arts in Soviet Russia. According to its anti-foreign policies, Böhme was exiled to Orenburg on account of his German heritage. It is said that he died there in 1938, though he was also said to be seen working on the Turkmenistan Canal in 1941.

Böhme composed 46 known works, of which his Trompetensextett in E-flat minor for brass sextet and Trumpet Concerto (Op. 18) are the best known. He wrote in the Romantic style, primarily works for trumpet and brass instruments in general. While, as a consequence of his exile, his works were neglected during the Stalinist era, Böhme is increasingly being rediscovered.