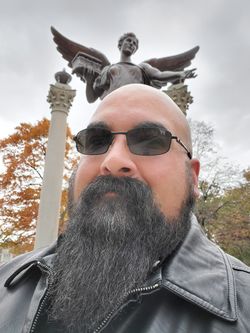 Orange Skies, for Wind Ensemble, Percussion, and Organ originally began as an arrangement of Be Thou My Vision in the mid-summer of 2003. After a severe thunderstorm around dusk knocked out the power in my home, I found myself standing outside watching the sky. A brilliant shade of orange extended itself across the horizon, sun rays were visible through the rain, gray storm clouds rolled by, lightning flashes illuminated the approaching evening, and thunder boomed mightily in the distance. I was fascinated, and moved by nature’s display of power, and beauty. As such, I started to write this arrangement of Be Thou My Vision; I intended it to be for the Wabash High School Band, so the theme of “Orange” made complete sense, being one of their school colors. Life, however, took over, and I never completed more than a skeleton of the piece. That was, until March 17, 2019; when Orange Skies, quite instantly, became an elegy.

It was on this day that I was contacted and informed that the former band director at Wabash City Schools was in hospice care, dying from a tumor on his brain. Art Conner was never one to boast, or to brag. He also would not let on that anything was ever wrong with him, so the fact that no one really knew about this, honestly, was no surprise. He lived a very quiet life, and was just so in his character.

In the summer of 2002, the course I was supposed to take that kept me from initially working with Wabash, was cancelled. Call it a twist of fate - Art hired me as a technician, while hiring some of my other closest friends as well. It was during this time that my love for teaching music was rekindled, from mere embers back to a roaring fire. The students and the staff opened my eyes as to why I was studying to be in the profession in the first place; the experience completely turned my attitude and life around. I am forever indebted to that group of wonderful people.

After our successes throughout the summer, I discovered my original student teaching assignment needed to be changed, as the new director that was hired was a first year teacher. Coincidentally, this information was relayed near the conclusion of the season. When I told Art what had happened, he offered for me to come student teach with him. Not only did Art offer me the chance to apprentice with him, he opened the doors to his home for me to stay during the school week, so that I would not have to commute daily to and from Muncie and Wabash during the heart of Indiana winter. Art most certainly did not have to make either of these gestures, but he did, because that’s the kind of person he was.

I could not have asked for a more perfect situation for student teaching. I basically lived Art’s daily life, Monday through Friday, including some Saturdays as well. He was the only instrumental music teacher in the school district, and he did it ALL. There were days we would arrive at school at 6:30 a.m. (regularly), and not return home until 9:00 or 10:00 p.m. Community Band, basketball band, jazz band, winter guard rehearsals/performances, 5th grade instrument tryouts; I don’t know how he did it all the years that he did. I would be so exhausted at the end of the day, and I was 22 years old! Art and I developed a bond, and a trust, that when he came down with the flu, and was out of school for a week, he let me run his entire program for him. He believed in me enough to do that, only a couple of weeks into the semester. What an honor, and how very humbling.

When I relocated to Texas in the summer of 2004, Art and I stayed in touch. He would send me postcards from the places to which he would travel. He even came to visit me a couple of times while visiting his family in the Houston area. It was always great to hear from him, and see him, though it had been quite some time since our last visit. I am deeply saddened that I will not get that opportunity again.

Art passed away, peacefully in his sleep, on March 30, 2019. I will miss you dearly, my friend. Thank you for EVERYTHING. You were never told that enough - THANK YOU!

I dedicate this composition to Art, all of his friends, family, former students, and to anyone whose lives were positively affected by his time on Earth. With much love, and appreciation for all of you.