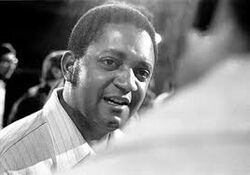 Oliver Nelson was born into a musical family in St. Louis, Missouri. He began learning to play the piano when he was six and started on the saxophone at eleven. Beginning in 1947 he played in "territory" bands in and around St. Louis before joining the Louis Jordan band where he stayed from 1950 to 1951, playing alto saxophone and arranging charts for Jordan's band.

In 1952, Nelson underwent military service in the United States Marines Corps, playing woodwinds in the 3rd Marine Division band in Japan and Korea. It was in Japan that Nelson attended a concert by the Tokyo Philharmonic Orchestra and heard Maurice Ravel's Ma mere l'Oye and Paul Hindemith's Symphony in E Flat. Nelson later recalled that this "'was the first time that I had heard really modern music, for back in St. Louis I hadn't even known that Negroes were allowed to go to concerts. I realized everything didn't have to sound like Beethoven or Brahms ... . It was then that I decided to become a composer'".

After completing his degree Nelson moved to New York City, playing with Erskine Hawkins and Wild Bill Davis, and working as the house arranger for the Apollo Theater in Harlem. He also played on the West Coast briefly with the Louie Bellson big band in 1959, and in the same year began recording for Prestige Records as the leader of various small groups. From 1960 to 1961, he briefly played with Count Basie and Duke Ellington, and then joined the Quincy Jones big band playing tenor saxophone, both in the U.S. and on tour in Europe.

In 1967, Nelson moved to Los Angeles to be near the television and movie industry and began composing background music for television and films, for which he became highly sought after. During this productive time he also arranged and produced albums for pop stars such as Nancy Wilson, James Brown, The Temptations, and Diana Ross. Along with his big-band appearances he led a small group in a United States Department of State-sponsored tour of West Africa in 1969.

Less well-known is the fact that Nelson composed several symphonic works, and was also deeply involved in jazz education, returning to his alma mater, Washington University, in the summer of 1969. Nelson's book of jazz practice exercises, Patterns for Improvisation, was published in 1966 and remains highly regarded to this day.